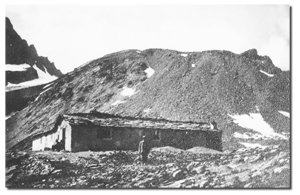 The ancient Rifugio Gastaldi was built by the Sezione di Torino of the Club Alpino Italiano when mountaineering was taking its first steps on the closest mountains, precisely in the Lanzo Valleys. It is dedicated to the former president of the Club, geologist Bartolomeo Gastaldi.
The first building built in Crot del Ciaussiné, that owes its name to an ancient calcium quarry, dates back to 1880 and consisted of one small room. During the following twenty years it was enlarged several times but nevertheless, Rifugio Gastaldi Refuge was inadequate for the growing number of mountaineers. Then Sezione di Torino of the Club Alpino Italiano decided to build a new refuge-hotel which was built a few meters next to the old refuge.
The new refuge was solemnly inaugurated on 2 September 1904, on the occasion of the XXXV Congress of Italian Alpinists here held in Val d’Ala di Lanzo participated by 160 mountaineers from all regions of Italy and 45 guides. During those years the refuge offered real luxury hotel services with all comforts, including hot running water, radiators and champagne. Unfortunately, after only four years the new hotel refuge was destroyed by a fire caused by the inadvertency of some guests. Rebuilt as before, it was inaugurated again two years later and enlarged in 1930.
During the II° World War it served to partisans as a base for Resistance and during the clashes in October 1944 against the Nazi forces it was set on fire and destroyed. Thus, although seriously damaged the old Vecchio Rifugio resumed its precious function conducted by Giuseppe Ferro Famil, celebrated guide known as “Vulpòt”. This period lasted until July 26, 1970, opening date of the rebuilt new refuge, which through many technological modernisation continues its history today.
In 1983 part of the Vecchio Rifugio was transformed into a permanent exhibition, connected to the Museo Nazionale della Montagna di Torino and dedicated to the secular history of local mountaineering.